Rider #1: “Will there be any water for a bottle shower or laundry?”

Tallis: “The risk is low.  But you have to make your own decisions.”

Rider # 3:  “Are there any crocodiles in that section of the river?”

Tallis: “Stick to the areas where there is a current.”

We entered Sudan with the expected fuss: a 2 hour wait to exit Egypt, then another hour to clear Sudanese customs.  An earlier ferry ride from Abu Simbel and a quick 35 km from the opposite bank of Lake  Nassar  to the border brought us to lunch time, which the crew served up in the “no man’s zone” between borders, effectively turning the buffer area into a buffet area.  Great use of down time. We experienced a similar scenario a few years ago between Nicaragua and Costa Rica, except that in that buffer zone all manner of opportunists, including money changing cowboys waving “bricks” of cash at panicky tourists, were permitted to conduct their business with machine gun toting police from 2 countries turning a blind eye.  Beyond comprehension.  The activity here was much lower key, the border mosque blasting the usual prayers being the exception.

The 1st miles in Sudan looked like a video feed from a surface rover on Mars. We made good time through the unscathed desert to allow time for “housekeeping” duties at camp. The first order of affairs was to swap $200 US through the window of a pick-up truck for 12K (or a 2 inch high stack) of Sudanese pounds. The rate was roughly 3X the “official” rate. The next acquisition was a couple of SIM cards from another African entrepreneur who showed up at the local municipal sandlot (our home for the night) to feed our internet habit.  We’ll see if the downloaded VPN workarounds for social media get us anywhere. If you are reading this you have the answer! Like in Myanmar and other countries, WhatsApp and the like have been used to fuel escalating protests against the government, so they shut them down. Short term for a regime under duress. We’ll have to repeat this new country “reset” 8 more times before we’re done. 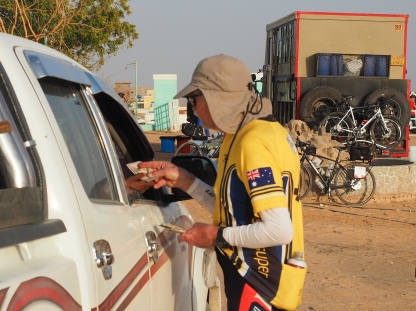 “Out of Arabia and into Africa” is how Stevie from Tanzania, one of our drivers, described crossing the border. The faces are darker, bodies longer and thinner.  Islam has a tighter hold. There will be no beer or alcohol of any kind to smooth out the kinks of days on the bike. In Abusara, a small gold mining town where it seemed that every man in the world with a metal detector had gathered, we – I should say Lenore – quickly garnered a crowd of about 30 wide eyed men at the Coke stop. Few tourists make it to Abusara. We have no souvenir of this, however. Photography is by permission only. Women (when we see them)seem never to give permission.  Pity, they are shrouded in bright ad colourful dresses. Giggling teenaged girls did engage us in “conversation” as we ate in Dongola, where it had been difficult to communicate to anyone the simple need for a restaurant.  We stand out here.

Children surround us at camp. We have seen pictures from previous tours where onlookers have had to be roped off, with galleries several bodies deep. So far that has not been necessary. The kids seem to have some savvy when it comes to putting up tents. They work for cokes – or at least the money we give them for that purpose because coke is the obvious currency.  We are not sad to see it pocketed for other uses.

Breakfast has been moved up 15 minutes for the early birds to rack up some miles before the heat. The sun did not get the memo, so we’re pulling up tent pegs under the moonlight. For us lunch is usually before 10:AM and we are into camp by 2:00 easily.

145 km. Check. We bathed in the Nile (surprisingly cool) and are here to tell you about it.  Another great , uncomplicated day in our March across the continent.

Gerry & Lenore have 3 daughters who they thought might want to keep track of their parents as they travel - hence the blogging. Oh. . . . we hope to put up some content worthy of your consideration as well! View all posts by Gerry